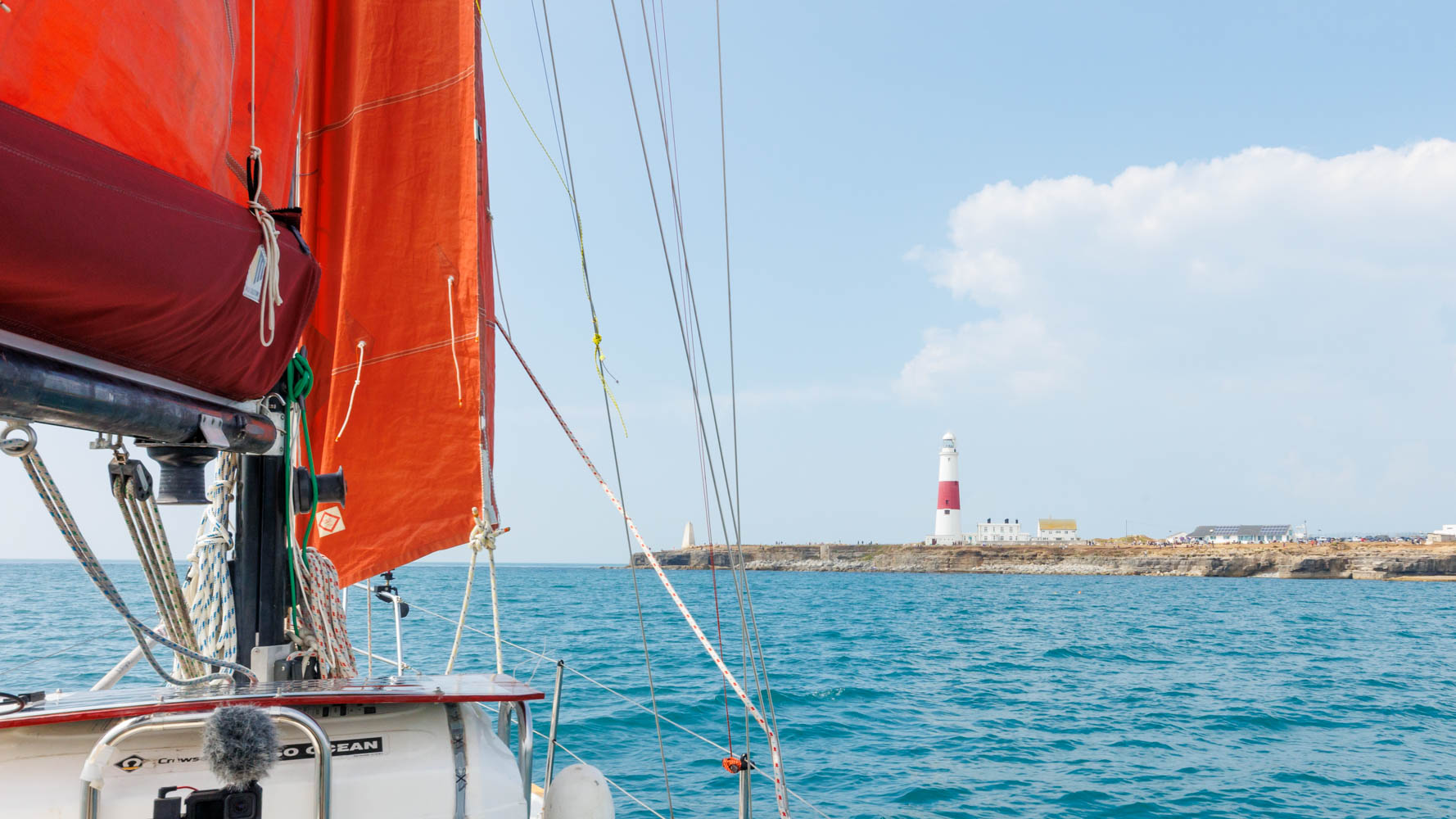 A little big hop, from Portland across Lyme Bay to Torbay, and the second major headland of the passage: Portland Bill.

Trilleen and I departed Portland after a night in marina. The luxury was welcome as was the diesel, water and laundry which brought things back into order. I was grateful to meet up with Liz Mangles, friend of the Andrew Cassell Foundation and maker of [Ewenique Furniture], for breakfast, and local knowledge briefing on rounding the Bill.

The sail out from Portland to the Bill saw the nice stable gradient northerly wind rapidly disappearing, which was… concerning. I pushed on with rounding the Bill inshore within touching distance, or so it felt, of the headland before arcing off onto due west for the welcoming arms of Torbay, invisible 40 miles ahead across Lyme bay. The next six hours were a study in frustration and waiting as a series of intense convective showers wiped out the gradient wind and gave Trilleen a nice friendly fresh water wash, and dumped copious amounts of rain down my neck from the drain at the back of the boom.

Finally around Sunset the gradient wind established itself, filling graciously and slowly from the North and suddenly Trilleen and I were reaching with the vane holding her, initially at steerage, then 1.3, then 2.5, then 5 knots under full sail. As full dark came down the sky cleared, opening a deep dark spacious star field. The Milky Way glowed overhead in the way it only does at sea or in the desert.

The first bruise of the trip then announced itself. I hadn’t previously noticed but the spinnaker guy cleat (weirdly mounted on the cockpit backrest) is at exactly the right height to collide with a non active medical implant under my skin above the pelvis. I now know that it does, and I’m not in a hurry to repeat the experience.

The wind continued to strengthen and at 15 knots apparent I pulled the first reef into the main, blessing as I did so the lovely people at [Spinlock] who helped supply the right hardware for the mast foot clutches. Suddenly Trilleen and I were more comfortable, the steering was coping better and even better there was no loss of speed.

After a bowl of pasta I returned on deck to be very alarmed by what looked for all the world like a very large fire on the horizon astern. Binoculars revealed it to actually be the upper limb of the moonrise. My alarm dissipated, and shortly after [Berry Head Light’s] welcoming double flash, together with the Seaton radio mast gave me back visual fixing as a back up to the space based wizardry.

I’m learning the best routines for me solo Sailing Trilleen over longer distances and the right patterns of navigation, lookout, rest and food are establishing themselves nicely, bring Trilleen into Torbay Roads and a safe if unadventurous anchorage in 10m off Roundhouse Point near Paignton.