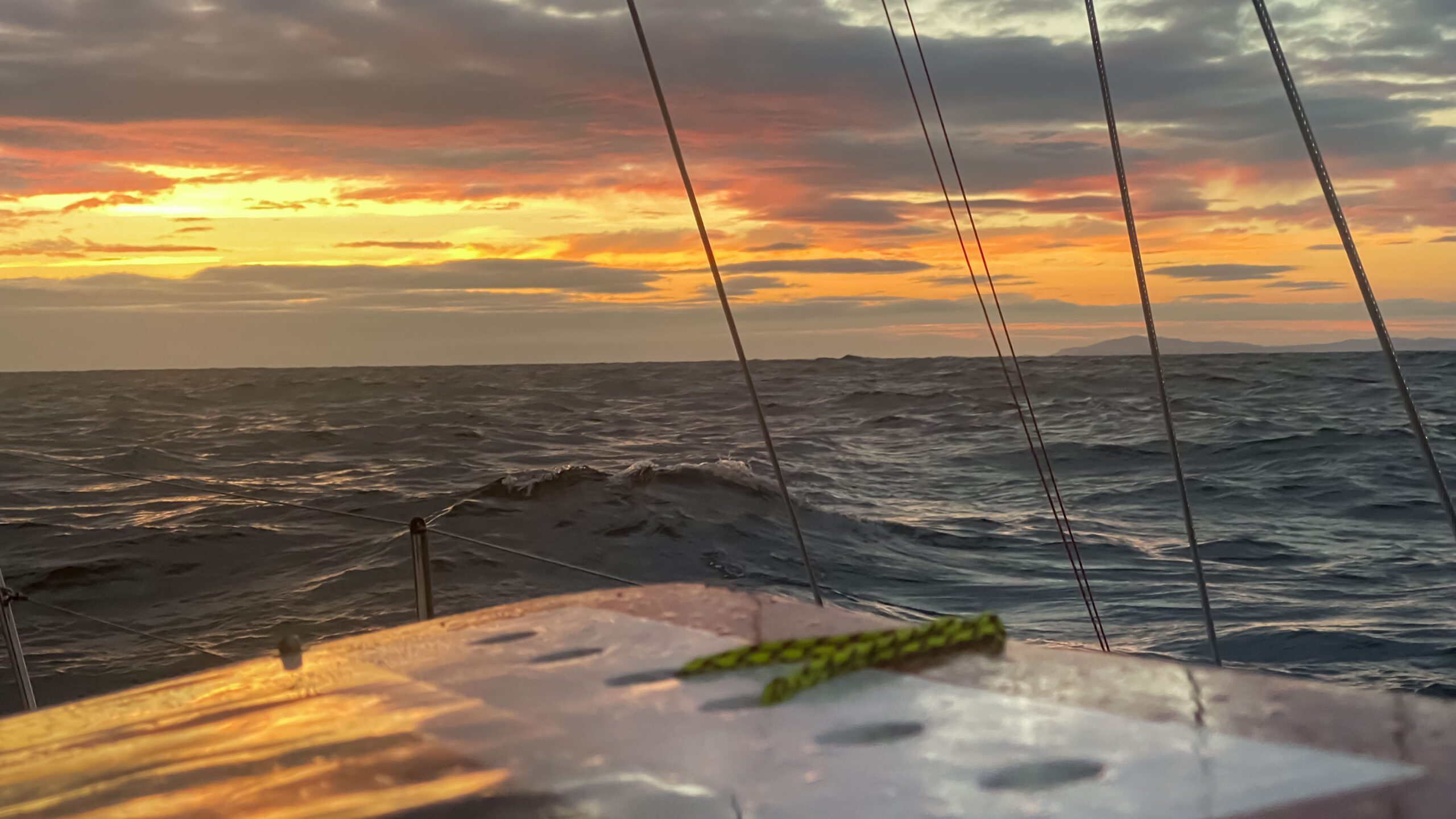 A 245 mile sail from Rossaveal, Galway Bay to Islay, Scotland, completed Trilleen’s passage round the west of Ireland. It’s good to have that bit of sailing finished before the weather closes down for the winter.

Trilleen and I had been loitering in Rossaveal on the north coast of Galway Bay for a few days watching the medium range forecasts from ECMWF and Predict Wind like a cobra poised to strike. There was increasing confidence that a prolonged southerly air flow would develop. Now the match between forecast, and actual conditions is never perfect, but when a near perfect match does occur it’s an occasion that has to be seized, as well as celebrated.

The loitering at Rossaveal had also been provoked by a couple of operational defects that had arisen on the passage up from Bantry Bay. Shortly after I launched Trilleen I had got hold of a vintage electric autopilot which I used to hold the boat steady when getting mooring lines and fenders rigged and steering under engine. This historic piece of electronics performed like a champ but in Rossaveal it failed, firmly and finally, when the electronics board at the heart of the system burned out. The other issue was that the screen of my plotter had cracked for a reason that I still can’t identify.

With that, the serendipity and generosity that seems to follow sailors kicked in. The Raymarine Representative in Ireland (Niki Potterton Electrical Ltd) managed to sponsor the provision of a ST1000 autopilot in no time at all, and the team at hand Galway Maritime brought it out to Rossaveal the evening before I sailed. Equally amazing my logistics partner Board Game Extras shipped a Raymarine plotter to me avoiding the complications of the post Brexit Irish border and the delays due to the funeral of her late Majesty.

I’m still blown away by the generosity of the Irish marine community and the willingness of others in the marine trade to help my small efforts at longer distance cruising and at raising funds for the Andrew Cassell Foundation’s work with disabled sailors. I should perhaps say here that I have paid personally for every bit of the refit and passage costs of Trilleen and so every penny raised goes directly to the Foundation.

Although Rossaveal Harbour is primarily a fish harbour and will become a centre for offshore wind support, it was a good place to hole up in. During recent renovations they built a marina with a crew lift which provides an accessible route from dock to boat for wheelchair users. A lovely amenity building is also in the process of being built.  When finished, I’m sure it will be a delightful place and a great stop for disabled yacht folk.

The passage north from Rossaveal requires rounding Galway and Connemara the part of Ireland which sticks furthest west out into the Atlantic. I was fortunate to have relatively calm sea and a quartering wind. These rare conditions meant that it was mostly safe to sail within five miles of the coast.

There are many places up the coast where I could have stopped with Trilleen for a break. However, the medium range weather forecasts from the ECMWF suggested that any stop I made could result in Trilleen getting pinned down for days. I was therefore intent on pushing the boat and myself as far as was safe. The other reason was that, apart from the coastal island of Inishboffin, most of the good anchorages and marinas are very many miles east of track in the deeply indented bays.

My genuine plan had been to moor in Lough Swilly, immediately after the island of Inishtrahull, just before the border between Ireland and Northern Ireland. However, as I approached Lough Swilly I faced a dilemma: Trilleen was going too fast, at over 4 knots, or just over 4.5 mph. That meant the entrance to Lough Swilly would be still shrouded in darkness as I approached, while I could see that If I carried on across the North Channel I could make a daylight entrance to Port Ellen on Islay.

It required a very serious effort to manage that last bit of the passage, especially since the wind fell light as soon as I left the Irish coast, and I was soon regretting the decision to pass Lough Swilly. Trilleen’s speed dropped and I began to worry that I would be reaching Port Ellen in the dark too. Slowly the wind did fill back in and stabilise allowing me to bring Trilleen into safe harbour as dusk fell.